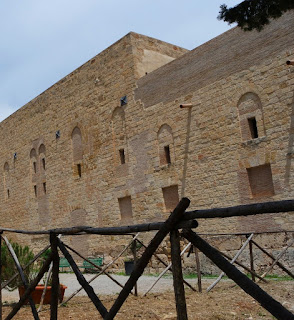 Yesterday  was another day out with the Urban Sketchers group in Palermo and a chance to try out my new  pocket field sketch box.

The appointment was at the Castello di Maredolce, a place I had only heard about but never visited. Not so strange as even people who live in the area don't even know it exists.
Maredolce is what is left of a 9th century Arab palace, subsequently taken by the Normans.
It originally stood in its own parkland with a large lake and island, hence the name Maredolce (sweet sea), and is hidden away in one of the poorest and most difficult parts of  the city, behind ugly urbanisation, rather like an oasis in the desert.

It was quite hot so I chose my first view from under the shade of a tree, with my back to what is left of the lake.

The castle has only recently been renovated and they are constantly digging up relics, the man with the keys showed us the little room where they are stored. 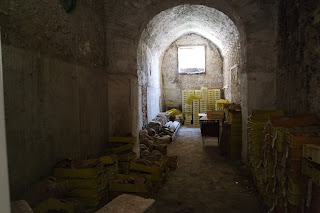 Part of the building had been used as a church and I sketched looking up into the tower or what was once a minaret. 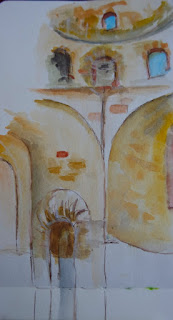 Then it was back outside for one last sketch. 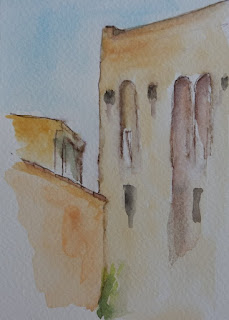 I was trying to imagine what the original arab palace looked like and I found this illustration of King FedericoII in a later period.

...and my new field box? I'll save that for another post!

Posted by Cathy Holtom at 20:10
Email ThisBlogThis!Share to TwitterShare to FacebookShare to Pinterest

I love the multi-media feel of your post. The architectural style of the period, with all the arched tops, is appealing. You're Urban Sketchers group is lucky to have such facilities to spend time at. Once again, this sketching habit leads to discoveries under our own noses. Nice work.

I love a little history and background information. I never knew until recently that the Normans went so far south as Italy. Great place and great sketches!

Thank you John, Sicily is like an 'open air' museum, there is so much history and never ending places to sketch and paint!

Thanks Judy, I like to learn about the places I visit, better than a history book?
There is a lot of Norman architecture and history here, the Arab/Norman mix is unique to this part of the world.

What a fabulous place to sketch! Very interesting post, Cathy. I felt like I traveled through time.

Where to find me